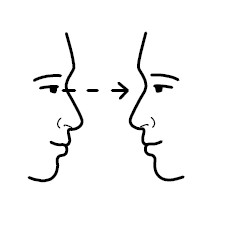 Have you ever wondered what your customers are thinking? The ability to read minds has been a pursuit of mankind for eternity. To date we still cannot read another human’s mind, but we can have a reasonable incite into the implications of customers thoughts by studying some simple rules regarding their body language.

Body language has been around a long time. You can tell a lot about someone by observing his or her hand gestures, general body movements, voice intonation, modulation and inflection, when answering poignant questions, the content of what they are saying and facial movements. Many people have succeeded in controlling their hands, words and body language to make it hard to accurately read them. Interviews are a perfect example where an individual is self-conscious and presents an unnatural façade.

Visual, kinesthetic and emotional questions create different eye movement effects. When we combine eye movement with the dilation and constriction of the person’s pupils, with their body language, hand movement, voice content, modulation and intonation, we get a fairly accurate picture of the real situation that the person is attempting to use a façade to disguise.

Throughout history, we have been preoccupied with the eye and its effect on human behavior. We have all used such phrases as “She looked daggers at him,” “She has big baby eyes,” “He has shifty eyes,” “She has inviting eyes,” “He had that gleam in his eye” or “He gave me the ‘Evil Eye.’” When we use these phrases we unwittingly refer to the size of the person’s pupils and to his or her gaze behavior. The eyes may well give the most revealing and accurate of all human communication signals because they are a focal point on the body and the pupils work independently.

In given light conditions, the pupils will dilate or constrict as the person’s attitude and mood change from positive to negative and vice versa. When someone becomes excited, his pupils can dilate up to four times their normal size. Conversely, an angry, negative mood causes the pupils to contract to what are commonly known as ‘beady little eyes’ or “snake eyes.” The eyes are used a lot in courtship; women use eye make-up to emphasize their eye display. If a woman loves a man, she will dilate her pupils at him and he will decode this signal correctly, without knowing he does so. For this reason, romantic encounters are often arranged in dimly lit places that cause the pupils to dilate.

Young lovers who look deeply into each other’s eyes unknowingly look for pupil dilation; each becomes excited by the dilation of the other’s pupils. Research has shown that when pornographic films are shown to men, their pupils can dilate to almost three times the normal size. When the same films are shown to women their pupil dilation is even greater than that recorded by the men, which raises some doubt about the statement that women are less stimulated by pornography than men.

Young babies and children have larger pupils than adults and their pupils constantly dilate when adults are present in an attempt to look as appealing as possible and thus receive constant attention.

Tests conducted with expert card player’s show that fewer games were won by the experts when their opponents wore dark glasses. For example, if an opponent were dealt four aces in a game of poker, his rapid pupil dilation would be unconsciously detected by the expert, who would get a feeling that he should not bet on the next hand. Dark glasses worn by the opponents eliminated pupil signals and as a result the experts won fewer games than usual.

The ancient Chinese gem traders who watched for the pupil dilation of their buyers when negotiating prices centuries ago used pupil watching. Prostitutes put drops of belladonna in their eyes to dilate their pupils and to make themselves appear more desirable. The late Aristotle Onassis was noted for wearing dark glasses when negotiating business deals so that his eyes would not reveal his thoughts.

An old cliché says, “Look a person in the eye when you talk to him.” When you are communicating or negotiating with others, practice “looking them in the pupil” and let the pupils tell you their real feelings.

Check out part two here to learn more about gaze behavior and how to control a person’s gaze.